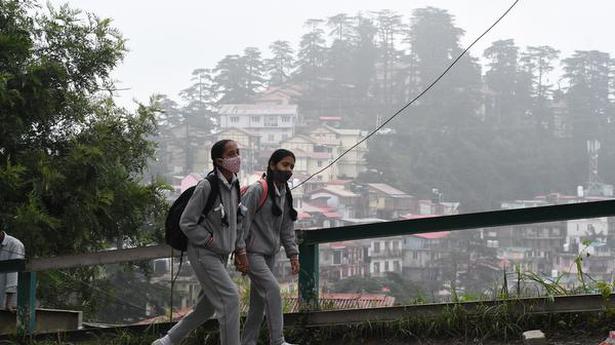 At least 14 States and Union Territories have reopened or plan to reopen schools partially this month, given the continued low numbers of COVID-19 infection and the high rate of vaccination among teachers. However, almost all States only plan to bring back older students despite the Indian Council of Medical Research’s recommendation to start with primary school students.

At a Health Ministry press conference on Tuesday, NITI Aayog member V.K. Paul said almost 50% of teachers across the country have been vaccinated, but emphasised that more effort is needed. Although teachers were not among the frontline workers who received the first priority in vaccination, some States have issued circulars directing them to get their shots even as schools begin to reopen.

Podcast | Can, and should, India reopen schools now?

Last week, a parliamentary panel had noted that school closures have hurt the social fabric of families, led to an increase in child marriages and in children being pressed into work at home. The expected learning losses are likely to impact the cognitive capabilities of students, it said, warning that children’s nutrition and mental health have also been affected.

Over 15 lakh schools across the country shut their doors in March 2020, and only a few reopened briefly before the second wave of the pandemic. More than 25 crore school children have been dependent on online or distance education since then, with many from poor or remote communities effectively losing more than a year of schooling.

In response to a query from Congress MP Shashi Tharoor in the Lok Sabha, Education Minister Dharmendra Pradhan listed eight States that have opened or planned to reopen schools by mid-August. The first to resume face-to-face classes was Haryana, which reopened for Classes 9 to 12 from July 16, followed by Nagaland, which allowed Classes 11 and 12 from July 26.

Punjab, Uttarakhand, Himachal Pradesh, Puducherry and Lakshadweep all began classes in the first week of August, although only the two Union Territories reopened school for all classes, with the other three sticking to high schoolers only. Andhra Pradesh plans to begin on August 16.

Apart from these eight mentioned by Mr. Pradhan, Karnataka intends to resume offline classes from August 23 for Classes 9 and 10 and the pre-university courses, equivalent to Classes 11 and 12. Tamil Nadu will also reopen school for Classes 9-12 from September 1.

Uttar Pradesh plans to restart classes from August 16 for intermediate students, while Odisha is carrying out a phased reopening through July to September.

Maharashtra plans to reopen schools on August 17, with offline classes beginning for students from Class 5 onwards in rural areas and from Class 8 onwards in urban areas, although these plans are restricted to areas with a consistently low rate of infection.

In the national capital, students of Classes 10 to 12 will be allowed to go to their schools for admission-related work and practical activities for their board exam from this week onwards, as the Delhi government continues to deliberate on a reopening date.

At a press conference last month, Indian Council of Medical Research Director General Balram Bhargava had recommended that it would be wise to reopen the primary school sections first, once staff are vaccinated, as young children are at lower risk of infection, while high schoolers are not yet old enough to be vaccinated. However, he said it was important to ensure that not only teachers, but all school support staff are vaccinated on a priority basis.