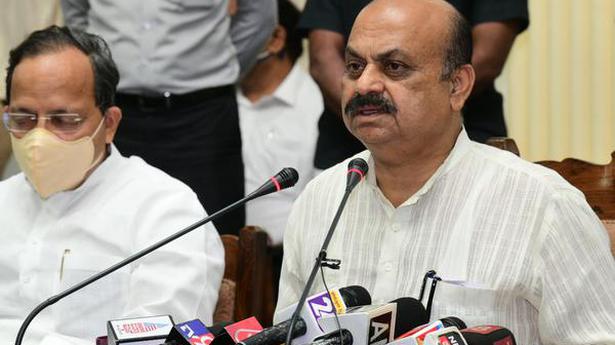 Chief Minister Basavaraj Bommai announced that 29 legislators will be sworn in as ministers at 2.15 p.m. on August 4 at Raj Bhavan in Bengaluru. This will leave four more slots to be filled. He said the party high command had directed that there will be no Deputy Chief Minister in his Cabinet, unlike under his predecessor B.S. Yediyurappa who had three.

Mr. Bommai ruled out any confusion or dissidence within the party and said the new Cabinet had the blessings of the party’s central leadership, and mainly B.S. Yediyurappa.

Mr. Bommai claimed that the Cabinet was balanced and gave a caste-wise breakup – seven each from OBCs and Vokkaligas, eight from among Lingayats, three from Scheduled Castes, one from scheduled tribes, one from the Reddy community and one woman.

BBMP sprayed disinfectant around Raj Bhavan ahead of the swearing-in ceremony of new ministers in Bengaluru on August 4, 2021.
| Photo Credit: K. MURALI KUMAR