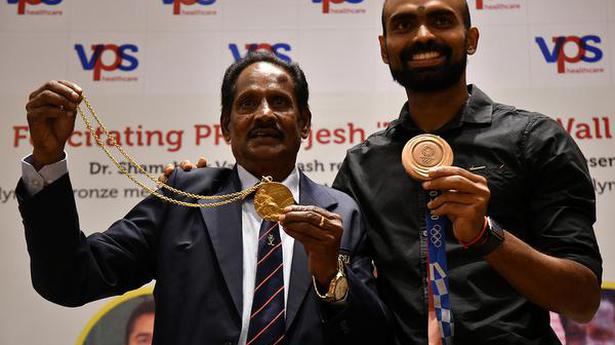 As a junior with a hockey club in Thiruvananthapuram many years ago, goalkeeper P.R. Sreejesh had gone to Kannur to play a tournament. Manuel Fredericks, then Kerala’s lone Olympic medallist with his hockey bronze at Munich 1972, had gone to meet the youngsters.

“Fredericks had brought his medal to the ground…that was the first time, we saw an Olympic medal,” said Sreejesh in a function to fete him here on Thursday.

This time Fredericks, also a goalkeeper, had a close look at Sreejesh’s hockey bronze which came in Tokyo. Fredericks had brought his bronze too and for the first time, Kerala had a look at its only two Olympic medals in history.

Dr. Shamsheer Vayalil, the UAE-based chairman and managing director of VPS Healthcare, had announced a ₹1 crore cash award for Sreejesh and he had brought Fredericks — who hails from Kannur but who mostly lives in Bengaluru — to present the cheque to the star goalkeeper. There was a pleasant surprise for Fredericks as he was presented with ₹10 lakh for his 1972 show.

Sreejesh said the hockey team’s next big goal was to qualify for the 2024 Paris Olympics.

“Definitely, we have to win the next Asian Games (in 2022, in China), that is the easiest way to get into the Olympic Games,” said Sreejesh.

“That is the first target, then we are going to host the 2023 World Cup in Odisha. The last time we played the World Cup, we couldn’t qualify for the semifinals.”

Both Fredericks and Sreejesh spoke about the need to improve basic facilities to improve the hockey scene in Kerala.

“Both of us are Olympic medallists and goalkeepers too…we need to offer more facilities for hockey in Kerala,” said Fredericks, now 73.

“There is only one astro-turf for hockey in Kerala, in Kollam. That too had been converted into a COVID-care centre and for nearly one and half years, it has probably not been watered.

“If we start private academies, and if VPS Healthcare supports us, we will have more children in hockey.”