Home » Cricket News » Australia’s best are back, but will it be enough for a title tilt? 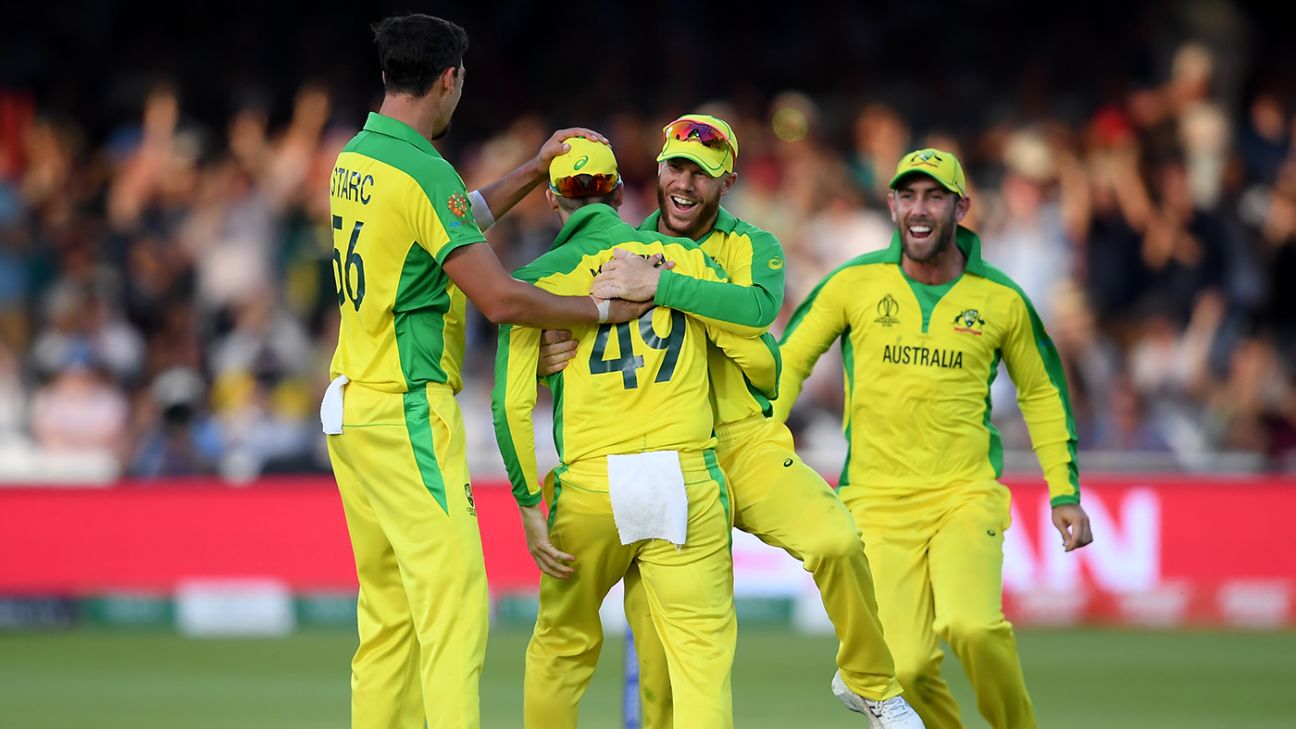 Australia’s best are back, but will it be enough for a title tilt?

These are the players that took the side to No. 1 in 2020 but the balance of the XI remains uncertain

Winning form is good form, and Australia has no form to speak of ahead of the T20 World Cup.

However, the return of their best and most experienced players for the tournament has given the team hierarchy some confidence within the four walls of hotel quarantine, despite the noise outside surrounding tension between the coach Justin Langer and the players.

The presence of David Warner, Steve Smith, Glenn Maxwell, Marcus Stoinis and Kane Richardson gives the squad a familiar feel to the one that won nine of 11 matches and four consecutive series in 2019-20, just prior to the Covid-19 pandemic. Australia were ranked No.1 in the ICC T20I rankings in May 2020 for the first time in history. Since then they have lost five consecutive T20I series and won just six of 21 matches, a record that has heaped enormous pressure on the coach.

But Warner and Cummins haven’t played a T20I since September 2020, missing four of those series. Smith has been absent for the last 15 matches, while Maxwell, Stoinis and Richardson have missed the last 10. Aaron Finch played with an injury in the Caribbean against West Indies and missed the entire Bangladesh series.

The recent results raise a broader question about Australian cricket that runs beyond the current coach. It shows Australia’s lack of T20 depth compared to India and England’s almost unlimited supply of high-quality T20 players and puts the BBL firmly into focus in terms of the league’s inability to produce readymade international players with the gap between T20I and BBL cricket seemingly as wide as ever.

Josh Inglis has been jettisoned into the 15-man squad ahead of Alex Carey and Josh Philippe as the back-up wicketkeeper and spare batter, on the back of his stellar middle order form in the BBL and T20 Blast dominance, after the other two failed to take their opportunities. Carey in some ways has been a victim of the team’s success during 2019-20. He played six consecutive games without batting during Australia’s winning run. Then his form dipped as the team’s dipped, Matthew Wade usurped him in the T20I side and now Inglis has taken his spot as the reserve wicketkeeper. Carey has been unable to translate his excellent ODI form, and strong BBL numbers, into T20I success.

It is a strong squad, but there are still some tactical hurdles to overcome if this team is to challenge in the UAE, as no Australia men’s side has made a T20 World Cup semi-final since 2012, and each issue feeds into another.

Australia have preferred to play five specialist bowlers in their first-choice side, a legacy of Langer’s success with Perth Scorchers where he won three titles. They had great success with this structure in nine games in Australia and South Africa in 2019-20 but the UAE conditions may not be as conducive to that make-up.

The debate is nuanced. The difference between the four overs from the fifth specialist bowler and the four overs between Maxwell, Mitchell Marsh and Stoinis must be of greater value than what a seven-player batting line-up can muster versus a six-player line-up. Australia are clearly vulnerable with just six specialist batters. Ashton Agar has been batting far too high at No. 7 and should probably slide to No. 8 at least behind Pat Cummins. National selector George Bailey referenced Cummins’ power-hitting form in the last two editions of the IPL, where he has made his two T20 fifties, when the squad was announced.

But even No. 7 for Cummins with Agar or Mitchell Starc at No. 8 is a gamble. The other major issue with six batters is it places even more pressure on the top order and does not allow them to play with as much aggression and freedom in the knowledge there is depth to follow. The structure of Australia’s line-up has a huge flow-on effect to all parts of the team.

Collapses, a lack of middle-order specialists and death hitters

Balancing batting freedom and responsibility has been one of Australia’s biggest issues even at full strength. Australia have botched chases from winning positions throughout the last 18 months. In Port Elizabeth in 2020 they needed 35 from 28 balls with eight wickets in hand and lost while just six down. In Southampton just six months later they needed 39 off 39 with nine wickets in hand and lost again.

Both times Australia had six batters with Agar at No. 7. Warner made half-centuries in both innings but struck at 119 and 123 respectively with the lack of batting depth clearly a factor in the way he approached each innings. Australia’s middle-order problems are also a contributor having been well-known and well-documented, particularly against spin.

Maxwell is the only true middle-order specialist in the squad and carries a huge burden. Marsh’s recent form at No. 3 has created more problems than it has solved. He has a far greater overall T20 record at No. 5. Stoinis has developed well in the role at No. 5 and 6 under the tutelage of Ricky Ponting at Delhi Capitals in the IPL, a point noted by Bailey.

Australia have opted not to pick a specialist death-hitter/bowling allrounder in the squad with Dan Christian and Daniel Sams named as reserves. If they play five specialist bowlers then one of Stoinis or Marsh doesn’t play. Their best opening combination is unequivocally Warner and Finch. That means the wicketkeeper, Smith, and Marsh or Stoinis must be flexible to bat anywhere depending on the situation.

Bailey confirmed that Wade remains the first-choice wicketkeeper. His strength is his power and explosiveness at the top of the order and his career numbers indicate his highest value is opening. His record in the middle order is relatively mediocre but Australia have been preparing him for a middle-order role as he and Warner are the only left-handers among the specialist batters.

If Inglis plays in Wade’s place, Australia have five or six consecutive right handers giving legspinners like Adil Rashid (England) and Hayden Walsh (West Indies) and left-arm orthodox Fabian Allen (West Indies) the chance to wreak havoc as they have done previously. Smith and Inglis are Australia’s best players of spin, but they don’t have the step-hit power that could be important in a tournament in the UAE.

Australia’s new-ball bowling is their strength with Starc, Cummins and Josh Hazlewood at their disposal. They also have a good spin combination in Agar and Adam Zampa. But they only have one death and variation specialist in Kane Richardson. Variations will be important in this tournament particularly if the surfaces in Abu Dhabi are slow.

The issue will be if Australia opt for a four-man attack to bolster the batting, then two of four quicks miss out, or they only play one specialist spinner. In both scenarios the other overs fall to Maxwell, Stoinis and Marsh. However, it will be hard to play just one specialist spinner in the UAE which means if they pick just two quicks, they could be vulnerable at the death as Richardson would likely be the one to miss out.

Cummins and Hazlewood aren’t known for their variations although Hazlewood, who has only played 17 T20Is, used the conditions in Bangladesh to work on his cutters and slower balls with good effectiveness. As shown in the 2016 T20 World Cup final with Carlos Brathwaite, and Mumbai’s IPL victory in the UAE last year with Kieron Pollard and Hardik Pandya, attacks must curtail death hitters to win tournaments. Starc was able to do it against Andre Russell in the recent Caribbean series but his value up front means a juggling act to save enough overs at the death to do it on his own if the attack is four bowlers without Richardson.

Alex Malcolm is an Associate Editor at ESPNcricinfo