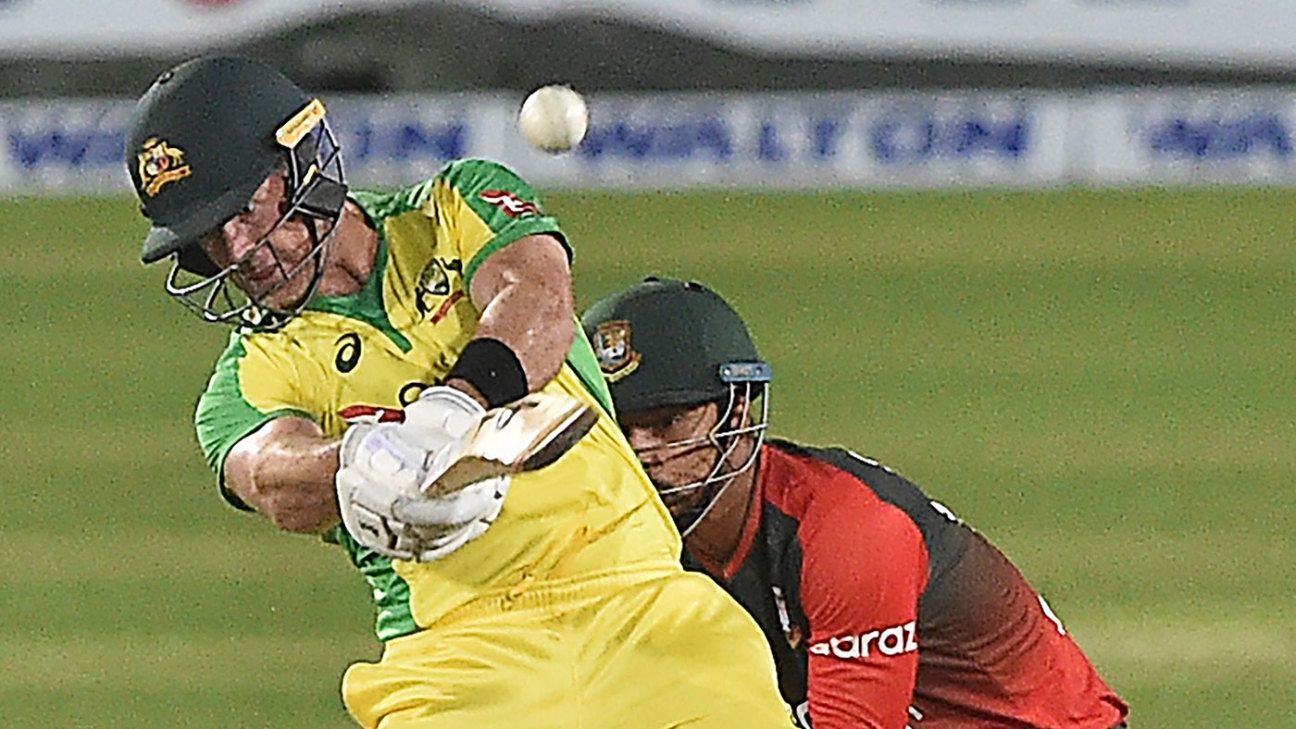 Dan Christian has seen most things that T20 cricket can throw up, so when he says conditions in Dhaka have been unlike anything else he has played in it stands up to scrutiny.
With one match remaining, the Bangladesh-Australia series has a run rate of 5.86 – the slowest in a series of three matches or more. In the fourth match, 104 was nearly defendable and looked like it would be when Australia were 65 for 6 despite Christian having monstered 39 off 15 balls, including five sixes in an over against Shakib Al Hasan, in one of the shrewder moves Australia have made on tour when promoting him to No. 3.

“They don’t compare to anything I’ve faced in my career,” Christian said. “These are as difficult conditions as I’ve seen for T20 cricket – 120 is like 190, it’s an extremely difficult place to try and bat. We’ve seen all the spinners and even the seamers, as soon as they start bowling slower balls it’s really, really hard work. It’s holding in the surface, gripping and turning and it’s a big ground as well. It’s certainly been different cricket but in terms of getting into rhythm or any kind of flow it’s been pretty hard.

“There’s certainly been things we can take out of these games from a batting perspective. You have to be so precise in your plans in these conditions. It probably doesn’t get more difficult than that at any level around the world than facing that kind of bowling here.”

He did not believe that conditions at the T20 World Cup in the UAE will come close to this despite the volume of cricket that will be played across Dubai, Abu Dhabi and Sharjah with the IPL taking place in the month before the tournament.

“I don’t think they’ll be anything like it, ” he said. “Say, somewhere like Sharjah where you get a bit of dew at night time and it’s a small ground, so 220 can be a winning score. Maybe at Dubai or Abu Dhabi they’ll be a bit slower but they are still 170-180 wickets normally…there’s an IPL before the World Cup, so there might be some worn tracks but think they are pretty used to getting them back up.”

Australia bowled 12 overs of spin during the fourth match with Ashton Turner completing his full allotment alongside Ashton Agar and the recalled Mitchell Swepson. There is an argument to say it could be even more, although Josh Hazlewood and Andrew Tye were also effective with a lot of cutters and changes of pace.

While admitting he has a vested interest, Swepson, who took 3 for 12 in his first outing of the tour, certainly sees scope for Australia having three frontline spinners at their disposal.

“I definitely think it’s something that should be considered, especially somewhere like here,” he said. “We’ve seen them play three spinners. I might be a little bit biased here, but certainly something that I think could work for us as well. Fingers crossed that might eventual but we’ll have to wait and see.”

Both Christian and Swepson are pushing to make the final World Cup squad, so their performances last night were timely. Christian, recalled for this tour after a gap of four years due to the various opt-outs from the squad, has played six of the nine T20Is so far across the West Indies and Bangladesh. Though he was unable to get Australia home in chases in the first match against West Indies and the third game against Bangladesh, on two occasions he has played his part in victory: an unbeaten 22 in St Lucia and then the firecracker 39 on Saturday.

“It has been a little stop-start for me but that’s the nature of the format and role that I play, generally coming in towards the end and bowling some overs in the middle,” he said. “I’ve loved being back in the team, representing my country again, it’s been awesome, and from a cricket perspective I’ve just got to keep training well and preparing as well as I can. When that opportunity arrives hopefully I can grab it.”

Swepson has had even less opportunity to shine and, after an expensive outing in West Indies, he took advantage of tailor-made conditions to cause Bangladesh’s middle order plenty of problems.

“It can be difficult to gauge sometimes where you are at when you are just bowling in the nets, so last night was a good confirmation of where my bowling is at,” he said. “I got that one game in St Lucia and it didn’t quite pan out how I wanted it to so last night was that reassurance that the ball is still coming out well.”