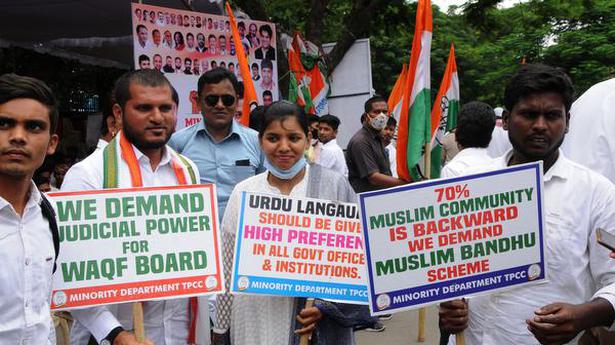 Telangana Congress president A. Revanth Reddy has asked the minorities not to trust the car (TRS symbol) or the kite (AIMIM symbol) as ultimately the Bharatiya Janata Party (BJP) was benefiting with their association.

Mr. Reddy said only the Congress had the strength and the desire to fight against Prime Minister Narendra Modi and his policies, and supporting the TRS was supporting the BJP. He was speaking at the “Aqliyaton Ki Lalkar” (Minorities garjana), organised by the TPCC Minorities department chairman Shaik Abdullah Sohail.

The TPCC president said the meeting was organised to explain to the minorities how the TRS was deceiving them. “We want to hit the TRS but Asaduddin Owaisi is in between,” he said referring to AIMIM president and Hyderabad MP Asaduddin Owaisi.

Mr. Revanth Reddy reminded that it was the Congress that provided 4% reservations to minorities that had benefited thousands of poor Muslims. On the other hand KCR promised 12% reservations to them and did nothing. “You have to choose your real supporter.” He said KCR had neither provided the promised Double Bedroom Houses to the minorities nor the financial support. Now at least KCR should give ₹10 lakh loan to minorities and they would pay back ₹12 lakhs with their hard work. “It is time to send the car to Jummerath Bazaar,” he said referring to popular bazar in the old city where the scrap is sold.

Nalgonda MP Uttam Kumar Reddy urged the minorities to ensure TRS defeat if they want to defeat the BJP at the Centre as both parties have an understanding to support each other.