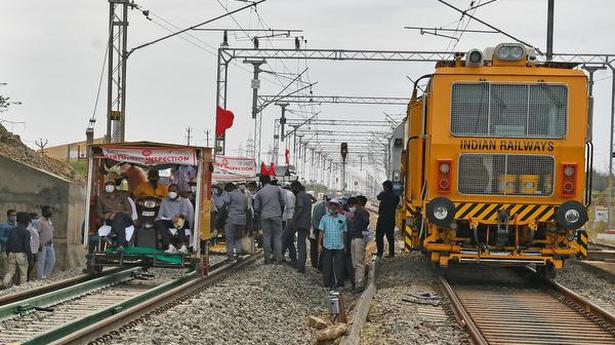 The speed trial was conducted in February 2021 and November 2020, says the officials.

Expressing satisfaction over the double track electrification project being completed between Thattapparai and Meelavittan, Commissioner of Railway Safety (CRS) (Southern Region) Abhay Kumar Rai said that from now on, more trains can be run here on Saturday.

In a brief chat with reporters, he said that there were a few minor works to be attended to. Otherwise, the double track project was largely completed. “In about four to five days, we will issue the completion certificate,” he replied.

During the inspection, the CRS had pointed out certain aspects to be done on signalling and station remodelling works, the officials said and added that the Madurai-Thoothukudi project which was taken up in 2018, on an outlay of ₹11,822 crore had been completed. The Madurai-Thoothukudi second track work was likely to get over early next year.

The doubling work between Madurai and Thoothukudi was taken up in phases, such as Vanchi Maniyachi and Madurai, Kovilpatti and Kadambur, and Kadambur and Gangaikondan. The speed trial was conducted in February 2021 and November 2020, the officials said.