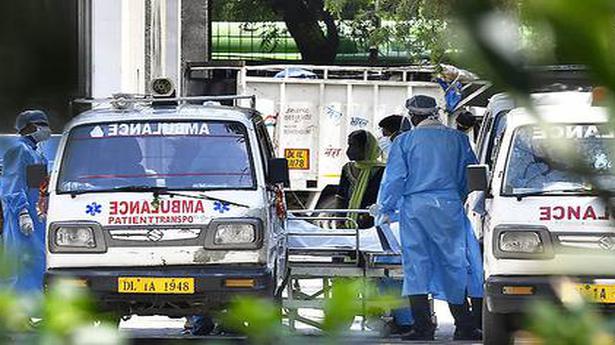 The number of “excess deaths” registered by the Civil Registration System (CRS) in Maharashtra ever since the COVID-19 pandemic hit (from April 2020 to May 2021), was an estimated 2,12,589 which is 2.8 times the official reported figure of 75,877 deaths for the same period.

The figures were arrived at from data on deaths registered month-wise in the online Civil Registration System from January 2018 to May 2021 in Maharashtra and accessed by The Hindu. As with other States, not all excess deaths could be related to COVID-19, but a bulk of them will be, during the pandemic period.

Six districts — Pune, Satara, Sangli, Yavatmal, Sindhudurg and Gondiya, with a combined officially recorded COVID-19 toll of 21,110 deaths between April 2020 and May 2021, were not considered for this analysis as the month-wise CRS registration data accessed was inconsistent between 2018 and 2019 for them.

Considering only close to 60% of deaths which were available in the online data for the baseline years 2018 and 2019 for calculating excess deaths, the estimate of 2,12,589 is a conservative one. Deaths registered for districts such as Mumbai, Thane, Akola, Amravati, Nandurbar were more than 90% of those recorded in the annual report while those for Ratnagiri, Raigarh, Kolhapur, Hingoli, Buldana, Washim were less than 40%.

If the excess deaths calculated were adjusted based on the percentage availability of data for 2018 and 2019 (by dividing them by the average of the percentage availability for these years) and re-calculated for the State (without the six omitted districts), the estimate increased to 3,10,727 deaths corresponding to a multiple of 4.1 over the official death toll of 75,877.

Similar to what was observed in other States, the excess deaths multiple (unadjusted) was 2.4 times between April and December 2020, and this went up to 3.42 times in 2021. This was largely due to a spurt in mortality in the month of April 2021 when a high of 1,17,723 deaths were registered online. Unlike other States, deaths peaked in April rather than in May 2021 for Maharashtra, indicating the fact that the second wave raged early in the State.

That Maharashtra was the epicenter of the second wave, largely characterised by the spread of the highly infectious Delta variant of the novel coronavirus, according to a INSACOG report in May 2021, is also borne out by the fact that deaths in April and May 2021 were three times the average number of deaths registered in these months in 2018 and 2019 (the pre-pandemic period). Only Haryana (2.65 times) came close as the multiple was higher than M.P. and Punjab (1.97 times), Himachal Pradesh (1.8), Karnataka (1.69), Tamil Nadu (1.65), West Bengal (1.51), Kerala (1.21), among States that The Hindu has analysed so far.

The excess deaths’ multiple over COVID-19 death toll between 2.8 to 4.1 times for the State (without six districts in the analysis) is comparable to those for southern States such as Karnataka (4.3), Tamil Nadu (6.4 adjusted to 4.4 if CRS COVID-19 tally is considered), besides the northern State of Punjab (3.3) but is lower than that for Madhya Pradesh (23.8) and Andhra Pradesh (17.9), West Bengal (11.1 without five districts) and Haryana (7.3) if the same baseline is considered (deaths registered in 2018 and 2019). Only Himachal Pradesh (1.9) and Kerala (0.42 based on the reconciled COVID-19 tally) had much lower multiples.

Mathematician Murad Banaji, who has been tracking COVID-19 numbers and has analysed excess deaths for Mumbai, told The Hindu, after looking at the numbers, “The data confirms that Maharashtra has been hit badly by the pandemic. But there are no major surprises. The scale of excess mortality is roughly as expected from the level of spread of the virus and COVID-19 fatality rates. And this is precisely the story coming out of civil registration data from many other states too”.

He added that “the data suggests that differences between states’ official COVID-19 death counts often reflect better or worse surveillance as much as the epidemic itself. In fact, Maharashtra has probably tracked its COVID-19 deaths better than many States. Although excess deaths could be three to four times the recorded COVID-19 deaths, this is much better than the national average. Interestingly, district-level data shows that there are no major differences in rural and urban death surveillance”.

Dr Pradeep Awate, Maharashtra State surveillance officer said Maharashtra has always followed the principle of transparency in case of collecting data regarding Covid-19 deaths. “If we undermine or hide the real numbers, we will fail to prepare for and counter the pandemic,” said Dr Awate, while speaking with The Hindu.

Maharashtra daily releases the data for the last 24 hours at around 5 PM. The central government has two portals CV Analytics portal of ICMR (for patients’ information) and Covid-19 portal (for death information). In addition, the RTPCR app is used for laboratories and Facility app for hospitals. Every lab submits the data through the RTPCR app on ICMR’s portal. State and districts download the information by 12 AM on both the portals mentioned above. Patients who are recorded twice are deleted from the list at district level and based on that final report is prepare by 5 PM.

During May 26 to June 10, the State updated the list of dead with 8,074 deaths. “We are dealing with huge data of patients, tests and deaths. The technical system that we use to collect this data throws up problems sometimes. Labs and hospitals delay submitting information. We routinely follow up with them to update information. The number of mis-match in total deaths is a result of delay in filing the information and not an attempt to hide anything,” he said.

(Data compiled and aggregated by Pratap Vardhan. With inputs from Alok Deshpande in Mumbai. Graphics support by Vignesh Radhakrishnan)