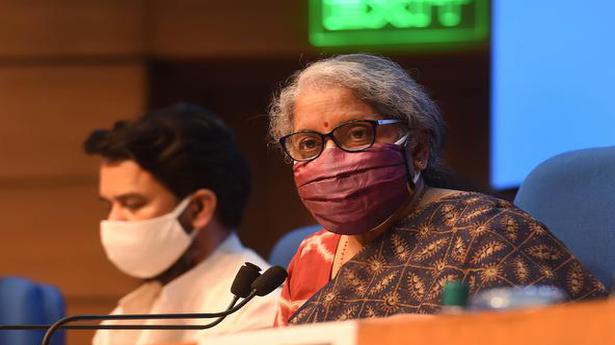 Finance Minister Nirmala Sitharaman on Monday took on the DMK administration in Tamil Nadu for reducing State levies on petroleum products by ₹3 a litre, after an earlier hike of ₹7 a litre (by the previous AIADMK regime), and accused it of being party to the UPA’s “trickery” of lowering fuel prices by issuing oil bonds.

Conceding that consumers were justified in wishing for lower fuel prices, Ms. Sitharaman, however, didn’t signal any imminent relief from the Centre on the excise duties and cess it levies, stressing that fuel prices are “a very difficult issue” and “the Petroleum Ministry is seized of the matter”.

“It need not always be the case, that the Centre should cut (taxes) and then States will follow… A taxpayer is only looking at the price and wants it to come down, (they) don’t care whether it is Central taxes or State taxes,” she said.

Arguing that States gained more than the Centre from higher fuel prices as they charged ad-valorem taxes while the Centre’s taxes were fixed, Ms Sitharaman alluded to the TN Budget announcement to cut State taxes on fuel.

“It is very interesting — the taxes were hiked by ₹7 a litre and now brought down by ₹3… I am not pointing a finger. It’s a decision of the State government. The present dispensation of Tamil Nadu was also in power when oil bonds worth ₹1.44 lakh crore were issued by the UPA to show reduced oil prices in 2013. Who is paying for it, the Modi 2.0 government,” the Minister said.

Ms Sitharaman also referred to the white paper issued by the new TN administration, which indicates the State has about ₹5 lakh crore of debt to contend with. “If (Prime Minister Narendra) Modi ji had released such a paper in 2014, we wouldn’t have to explain this (high fuel prices)… a white paper should have been issued to say what we inherited as oil bonds from the UPA. ”

“Look at the way governments have handled such a delicate issue. Look at the trickery… they say they reduced prices so we should do it too,” the Minister concluded.

“Today, you are asking me why we are not reducing the prices. I am subsidising the reduction they had offered. So far, ₹70,195.72 crore has been paid as interest on outstanding bonds worth around ₹1.31 lakh crore,” she added.

“Another ₹37,840 crore is payable as interest till 2025-26, taking the interest alone close to ₹1 lakh crore,” she asserted, adding this is also taxpayer money.

What Crypto Can Expect From Twitter’s New CEO