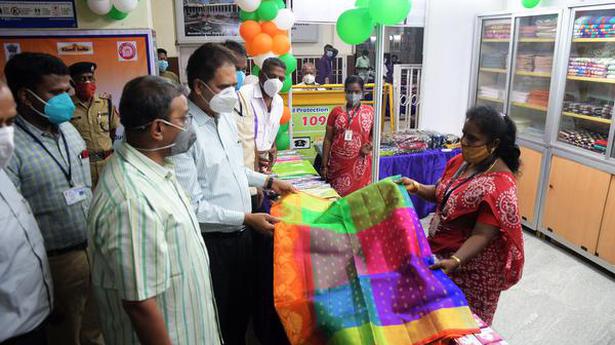 To commemorate the 75th year of India’s Independence, a khadi and handloom exhibition and sale, organised by Indian Railways and the Khadi and Village Industries Commission, was inaugurated at Madurai Railway Junction on Saturday..

The event was inaugurated by the Divisional Railway Manager, Madurai Division, P. Ananth. Other senior officials of the Indian Railways were present at the inauguration. The stalls have been put up near platform one.

The exhibition will be open for two hours every day from 7 p.m. to 9 p.m and will go on for a month. The products that were on display at the exhibition include khadi dress materials and village industries products like honey and incense sticks.

Similar exhibitions and sale of the khadi and handloom products were inaugurated at other railway stations across the country. In Tamil Nadu, it is being held in Madurai, Coimbatore and Chennai, said Divisional Director, Khadi and Village Industries Commission, R.P. Asokan.