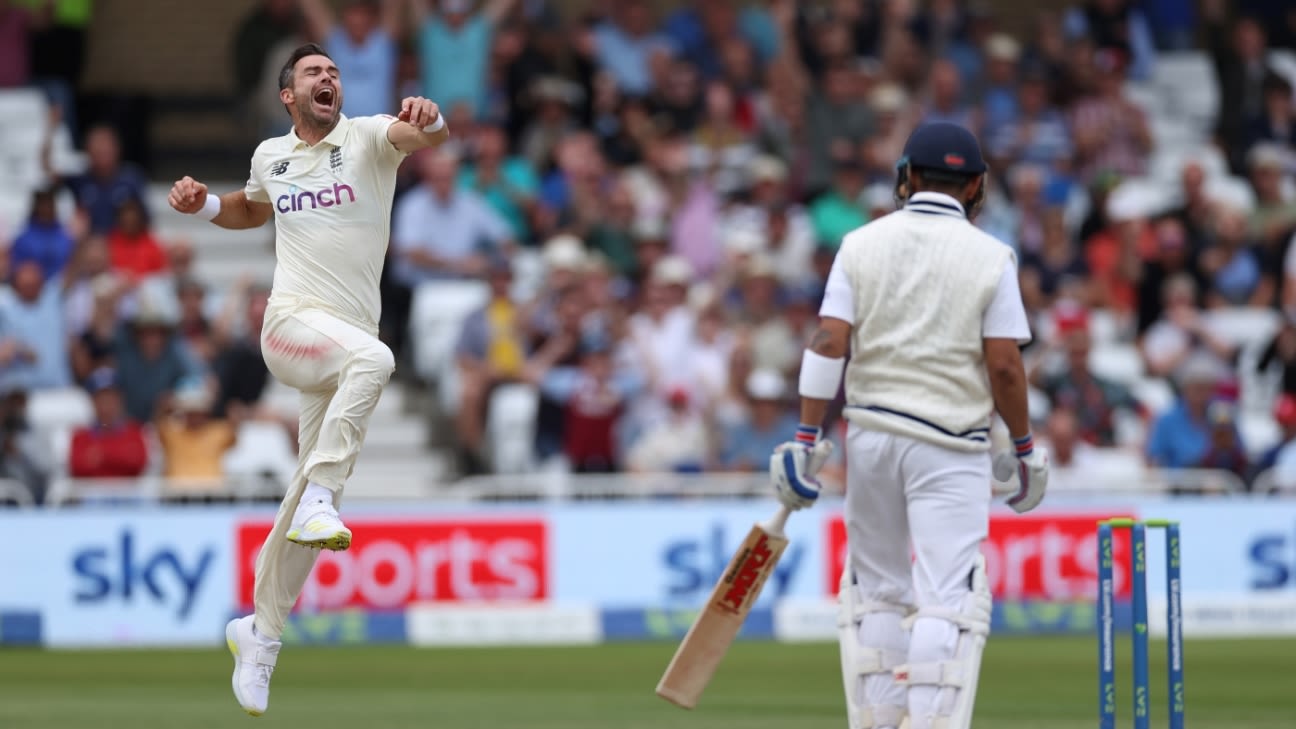 Get your dose of analysis, stats and colour from Trent Bridge on ESPNcricinfo’s live blog

The Trent Bridge Test between England and India is back in the balance. Which way will it swing? Follow ESPNcricinfo’s live updates to find out (Please refresh the page for the latest). Also, follow ball-by-ball commentary here and our Hindi coverage here.

What hectic action upon resumption. Rishabh Pant plays like Rishabh Pant does. Field is spread because there is hardly a score on board. An edge goes wide of gully, a bouncer top-edged for six, and all of a sudden England are just 38 ahead. And then one stops at Pant and he ends up chipping it straight to short extra cover. Not quite how England have planned it, but it is a wicket that allows them to breathe. India 145 for 5 in 50 overs, Pant gone for 25 off 20. KL Rahul still there on 58 off 159.

For those who can’t see the lovely James Anderson interview with Michael Atherton because of geo restrictions, here is a summary of it. The most fascinating part of it, of course, is the two balls that Anderson bowled to Pujara and Kohli to get them out. Let’s just look at it from the point of view of Pujara and Kohli and imagine what they are seeing.

Second thing: shiny side outside.

That is a definite sign the bowler is trying to bring it in. It is the change-up most classic outswing bowlers use these days because otherwise it becomes easy to line them up and leave them alone outside off. The moment you see the wobble release, or a split-finger release, your antenna is up for the lbw ball. If it is anywhere close to off, you are going to play at it.

Add to it that Anderson says he held the shiny side outside to get some drift in because in his first spell he had allowed India to leave just a few too many. If you do that, if the ball does anything in the air, it will drift in. And both those balls swung in. For Pujara it pitched on off, so there is no doubt he had to play at it. An entrenched Kohli might have left what he faced alone, but this was the first ball he was facing and surely he had not seen so closely what had happened with the Pujara delivery because he just walked out immediately.

So both of them played at the ball, both of them covered for the inswing, and the ball landed on the seam and left them. “I wish I could say I am this good,” Anderson tells Atherton on Sky TV “but it [what happens after the ball pitches] is a fluke.

“My thinking there is: I’m using the wobble-seam grip so I want the seam to wobble slightly so it might nip either way. And putting the shiny side on the left, trying to angle it in, so if there is any swing it will drift and it might seam either away once it hits the pitch. So it is just trying to make them play basically. If I tried to bowl that ball with an outswing shape there’s every change he would have left it. So it’s just to make them play, trying to drag them into the shot and also brings the stumps into play.”

Absolute bloody genius. It is a nightmare for the batter. All that happening, and the ball landing on a length. And then doing what it does? What do you do, Jack?

It has stopped raining, and we are due to resume play at 12.05pm.

Only 11 balls bowled before the rain arrived, but one of them was Rishabh Pant charging down the wicket and driving James Anderson wide of mid-off for four. So frustrating this contest hasn’t been allowed to take off.

First time an over was spread across three different sessions. (Where BBB is available)

We are starting on time

It rained in the morning, but the weather looks good for now. Play will begin on time, 11am. Another lovely session in store. James Anderson, you’d think, has the bit between his teeth, but India know they are just 58 behind and have six wickets in hand. The forecast for the rest of the day is a mixed bag. Don’t think we will get a whole day’s play in, but looking at the conditions, how much time do we really need for a result?