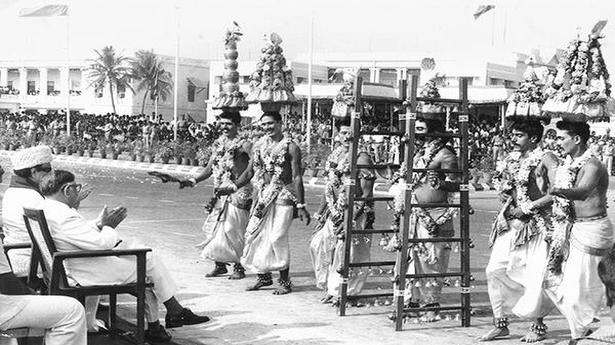 Madras Week | Where folk arts and Western music too thrived

Wherever we go, there it is. The COVID-19 pandemic has overwritten several scripts, laid to waste the plans of all. And this year, as the city celebrates Madras Day, in commemoration of a pact inked 382 years ago, it makes sense to anchor the overarching theme to the disruptions a pandemic causes. For a week, these columns will open a window to the past to examine aspects of the city that are in some way connected to such disruptions. While Madras Day events are low key and the usual pomp and frenetic activity that Chennaiites see during this week in August are missing, people have taken the online route, as with most things these past couple of years. For Chennai is still a city that its residents love, and harking back to its connect with good ol’ Madras is an annual ritual that has come to stay

While the city is conventionally associated with Carnatic music, Madras actually was a fertile land for the flourishing of several folk forms and western music. Even as the sounds of song have retired online during the COVID-19 pandemic, here is a hark back to a colourful and mellifluous past. The British constructed churches and brought pipe organs for their worship services. Madras got its first taste of Western classical music when the British came to trade.

Churches were the focal point for Western classical music then and parts of pipe organs were imported by ship and assembled here. St. Thomas Basilica (Santhome Church) is among the churches that still has a pipe organ being used for worship services.

Augustine Paul, music director, Madras Musical Association (MMA), said the churches were the best venues for sacred choral music and instrumental music as they were acoustically well-designed. Sunday evenings were dedicated to such music concerts. MMA, which was founded in 1893, was one such organisation that hosted concerts regularly. The Governor of Madras Presidency was its patron, and the Governor’s band used to play on important occasions.

There was not much of a gap felt in Madras when the British left the country after Independence as Indian musicians took over and made Western classical music popular in the city. Handel Manuel was the first Indian conductor of MMA. Victor Paranjyoti, who later founded Paranjyoti Choir, was also instrumental in promoting the choral tradition. German and British missionaries, who were also Tamil scholars, translated German and English hymns into Tamil. Similarly, many of the Latin hymns were translated into Tamil.

In Chennai, the strong presence of Western classical music to this day could be attributed in some measure to the magnificent Anglican and Scottish churches, including St. Andrew’s Kirk, St. George’s Cathedral and St. Mary’s Church, which are more than 200 years old.

During the British period, concerts were also organised to promote secular music outside the churches. Museum Theatre, Egmore, and Madras Club that was founded in 1832 were some of the venues where the British popularised operas and musical plays. Freemasonry, which had its lodges here, also organised music performances. The Madras Chamber Orchestra was famous for instrumental music outside churches, Mr. Paul said.

The Anglo-Indian population in Madras also promoted western light music and pop music during the 1950s. Many of them excelled as brass instrument players. When more enthusiasts adopted Western music and Carnatic exponents experimented, there was a crossover between Western and Carnatic music that led to fusion music. Muthuswami Dikshithar is also said to have set to tune ‘Nottu Swaras’ using Western notes after he heard Western classical music during his visit to Madras.

The Natya Sastra that forms the basis for south Indian music, dance and drama is also the basis for ‘Bhaaratha Koothu’ or ‘Theru-k-Koothu’ as it is known today. “The stories used to be from the Mahabharata, and old areas used to have regular performances,” said author and researcher V.R. Devika, who was smitten by the charm of ‘Theru-k-Koothu’ that she watched in the early 1980s.

“Even today there are Koothu artistes who live in the city and continue their art form, a ritualistic spectacle, especially in the month of Aadi, when Amman temples bring in Koothu performers. Amman temples in Madras and the villages surrounding it have always been part of ‘Bhaaratha Vizha’,” said Arumuga Thambiran, who retired as the Dean of the School of Performing Arts, Pondicherry University. He explained that the Othavaadai theatre, which was on a street off Wall Tax Road, was a hub for theatre as well as Koothu shows. “There used to be ticketed shows, and advertisements for Koothu troupes as well. Unlike the present, Koothu was not restricted to temple festivals,” he added.

The city, as K. Krishna Iyer wrote in The Hindu, had a thriving folk arts scene. In 1957, he organised a folk dance festival in Madras at N.K.T. Kala Mantap in Triplicane, a popular venue for events in those days. Apart from ‘Draupathi Vasthrapaharanam Koothu’ by Cheyyar Kannan and troupe, the festival had Kaichilambattam by K.C. Ekambaram, Villupaattu by Thozhavai Sundaram and party, Kirikatti Vadhyam by Mahadeva Pillai of Sembanarkoil, and kummi, kolattam and pinnal kolattam by artistes of Triplicane Saraswathi Gana Nilayam.

Chennai Sangamam, organised over a decade ago, incidentally during the DMK government, had succeeded in bringing back folk art performances, including Karagattam, Poikaal Kudhirai and Oyilattam to the city, which was a hub for such arts. “Artistes were happy at that point of time as it was an opportunity for them to showcase their talents and earn something,” said a Koothu artiste, who hoped such an event would be revived.