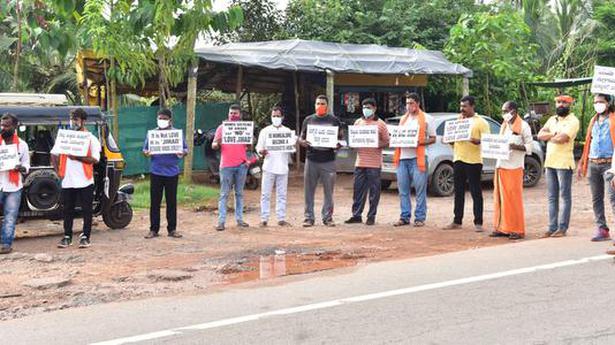 They were protesting outside house of former MLA and poet late B.M. Idinabba

Mangaluru police took Vishwa Hindu Parishad (VHP) Mangaluru divisional secretary Sharan Pumpwell and other activists into custody after they attempted to protest outside the house of former MLA and poet late B.M. Idinabba in Ullal on August 11.

Mr. Pumpwell and other VHP activists had come to Ullal, near Mangaluru, to display placards condemning the alleged support of Mr. Idinabba’s relatives to activities of Islamic State (IS).

The activists sat outside the gate and raised slogans. The police took away the protestors.

VHP activists being taken into custody in Ullal on August 11, 2021.

The National Investigation Agency (NIA) recently went to the house as part of a probe into an ISIS module in Kerala. They questioned some family members.

Later, the NIA arrested four persons from various parts of the country, including one from Mangaluru and another from Bengaluru.