Home » Lifestyle News » Meet the skydiver, with an India connection, who jumped off a plane in a couture gown

Meet the skydiver, with an India connection, who jumped off a plane in a couture gown

Have you seen an angel in the sky?

Recently, the residents around Arcachon in France, saw a vision in blue floating across the wide expanse of the sky. On a closer look, the ethereal figure was dressed in couture. The angel wears Prada? Not quite. In this case, it was an outfit by Dutch couturier Iris van Herpen. This dramatic presentation was part of van Herpen’s EarthRise collection for Paris Fashion Week Fall/Winter 21/22. She collaborated with award-winning French skydiver Domitille Kiger who did a graceful routine mid air, to the sounds of deep breaths and delicate musical notes that build up to a crescendo.

Kiger, who has spent much of her life jumping out of planes, just completed 20 years of skydiving. A member of international teams and also a trainer, the 36-year-old is part of the International Skydiving Commission, and the French Skydiving Federation where she was elected bureau member this year. “I have contributed to developing a new discipline of indoor skydiving called dynamic flying, and have organised indoor skydiving competitions around the world,” she says. But what she had never tried is diving in a floor length gown. “I was very focussed during the jump, as I was jumping without a helmet, without an altimeter, and in a garment that created a lot of drag, making flying movement more difficult than when I am jumping in my normal jumpsuit,” she says.

To the best of our knowledge, never before had a haute couture dress been specifically designed and created to be presented in free fall, says the amused skydiver. The outfit has hundreds of small circles individually stitched on to it to create an intricate pattern. The dress had to be strong to withstand the wind. It took a lot of effort and strong stitching skills to make sure that the outfit did not give way mid way during the dive. “After each jump, Iris and her team had to fix it,” says Kiger. Though the video looked like a free flowing dream, there was a lot that went in to make it look the way it did.

In the beginning, it started with a Zoom call, followed by numerous emails where I explained the specifics of fabric behaviour in the wind, what was possible and safe, and all kinds of technical aspects, says Kiger. Shortly after, she went to Amsterdam to van Herpen’s atelier, for a fitting, and some testing in a wind tunnel near the city, so the designer could see first hand how the fabric that she had in mind behaved in the wind. Post that, Kiger was sent several prototypes to try on. She wore one in the wind tunnel in Paris, and another at a drop zone in England. 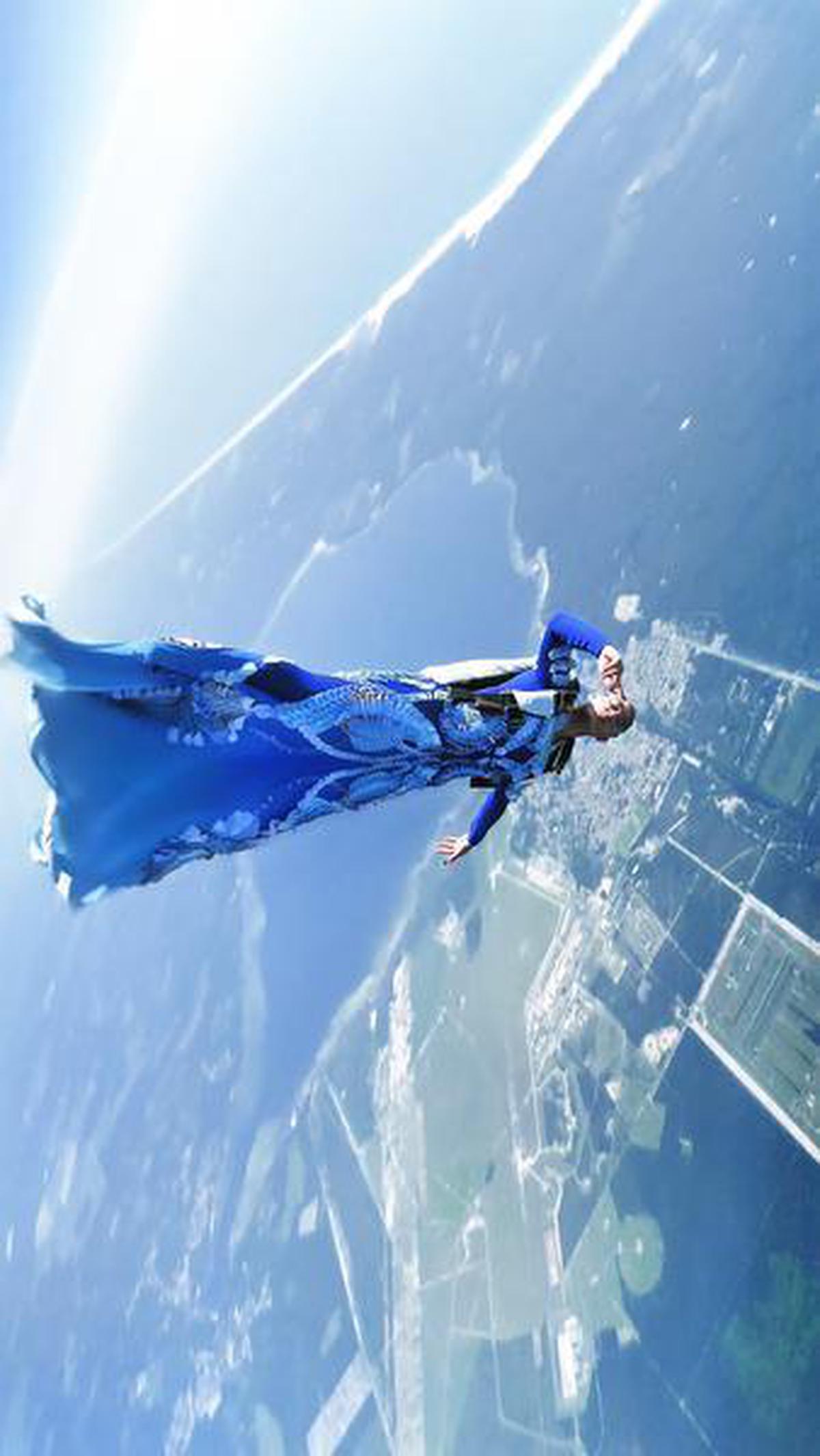 Finally, the entire shoot was completed in one day at Vertical t’air, in Arcachon. That morning, Kiger and Alex Aimard, the videographer, did four training jumps. Of which, three were in regular skydiving clothes and one in the final outfit. “I then spent three hours in make up and hairstyle, and did three shooting jumps in the afternoon,” says Kiger.

Interestingly, Kiger has an India connection. When she was younger, she lived and interned in India at French artist Nadine Leprince’s haveli in Shekawati, and still has “many good friends in the region”. “My father really loves India, and one of my middle names is Lakshmi,” she reveals sharing a picture of her passport. Always up for quirky, unusual experiments, Kiger is open to more collaborations. However, “On a personal level, I’ll probably stick to jumping in my normal gear, and focus the creativity on the flying,” she smiles.

Flu and dengue cases on the rise amidst COVID-19: Sure shot ways to keep yourself safe from dengue, malaria and chikungunya | The Times of India

Rudolf Weigl work has been honored by not one but two Nobel Prize nominations. (Screengrab: ...