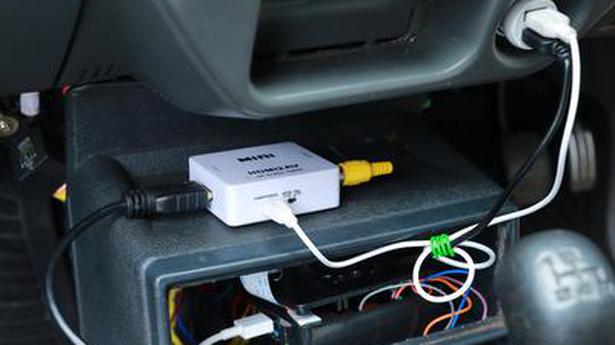 The camera in the apparatus keeps tab of yawning and frequent closure of eyes by the driver, following which the vehicle slows down and stops

A ‘driver drowsiness detection and fatal accident prevention system’ developed by a team of officials of the Motor Vehicles Department (MVD), who are in the final year of part-time B.Tech course at the Cochin University of Science and Technology (Cusat), could help avert fatal road accidents.

It is a combination of six commonly available devices, of which the prominent one is a night vision camera that records facial changes. It keeps tab of yawning and frequent closure of eyes by the driver, and they are analysed using software that banks on a micro computer, following which the vehicle slows down and stops, said Arun C.D., Motor Vehicle Inspector (MVI), Ernakulam RTO, who was part of the six-member team who developed it as part of their final year project.

“Initially, a red light turns on to alert the driver, and an alarm goes off. The accelerator function stops, hazard warning lamp lights turn on, emergency braking display board on the vehicle turns on [to warn other motorists], and the engine exhaust brake gets activated, if the driver fails to regain alertness, following which the vehicle grinds to a halt,” he added.

The team used a Maruti-800 to test the concept. “We are trying to get patent for the technology, and preliminary steps are over to get it published in an international journal,” said Deepu N.K., MVI, Perumbavoor.

The six devices cost the team around ₹30,000. “The price will come down considerably if vehicle makers install the system at the manufacturing stage. It will especially come in handy for drivers of long-distance buses, lorries, and cars. Accidents like the one involving a Volvo bus at Avinashi near Coimbatore in 2020 [which has been attributed to the lorry driver dozing off], which claimed 19 lives, can be prevented if a system which does real-time monitoring of the driver is installed. The response time is quite fast, and a vehicle whose driver dozes off can be brought to a halt in seconds, as the night vision camera can capture six frames per second. This can be improved and customised for further research,” Mr. Deepu added.

The innovative system comes at a time when sleep- or fatigue-induced accidents are passed off as due to negligent driving in police records. Many drivers have confessed that accidents occur as they doze off while behind the wheel. Premium vehicles warn drivers when their systems detect unusual zig-zagging of vehicle or variation in grip over the steering wheel. But they do not bring the vehicle to a halt, MVD sources said.

The other team members are MVIs Noufel A. and Vijesh P.V. and Assistant MVIs Vineeth V.V., and Renjith S. Their guide was Jayesh S., Assistant Professor at Cusat. Among those who witnessed a demo of the system was Minister for Transport Antony Raju and Additional Transport Commissioner Pramoj Sankar.