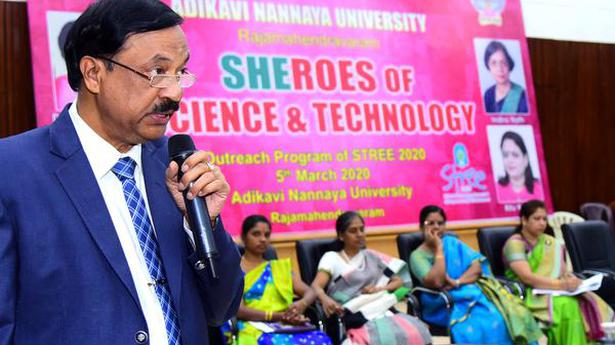 The Sports Board of the Adikavi Nannaya University (AKNU-Rajamahendravaram) has come under the scanner of the State government for alleged financial fraud and forged bills, submitted by the board to claim the fund with forged signatures of scores of Physical Education Directors (PDs) of the university-affiliated colleges in the East and West Godavari districts during the period of 2010-2018.

On August 18, the financial irregularities in the Sports Board came to light after a former Officer on Special Duty (OSD-AKNU), A.S.V.S. Samkrutyayan lodged a written complaint to the State government and Chairman, AP State Higher Education Council, seeking a detailed investigation into the fraud. The whistleblower has also submitted a list of evidence obtained through the RTI Act to the State government. A copy of the written complaint is with The Hindu.

“Many bills claimed by former Sports Board Secretary (2010-18) Avugudda Satyanarayana in the name of scores of Physical Education Directors (PDs) of the affiliated colleges have been found forged. The respective PDs have revealed this in their RTI replies and the same details have been enclosed in the complaint”, said Mr. Samkrutyayan.

The PDs of prestigious Kandukuri Veeresalingam Theistic College and Andhra Kesari Degree Colleges, Rajamahendravaram, have also revealed that their signatures were forged by the Sports Board, according to the complaint.

“The modus operandi of Mr. Satyanarayana was to submit the bills with the forged signatures of the respective PDs, claiming their financial entitlements and allowances for attending the sports events. The university had also given him ‘cheque power’ which was against the existing finance guidelines in the case of ‘Adhoc’ employee”, stated Mr.Samkrutyayan in his complaint.

Speaking to The Hindu, AKNU Registrar Prof. T. Ashok said, “We did not receive any written complaint from anyone on the alleged financial fraud in the university’s Sports Board. However, we will investigate the issue if any such complaint or guideline from the higher authorities is received.”

Prof. Ashok has added that Mr. Satayanarayana has been transferred from Rajamahendravaram campus to Kakinada campus in 2018 and is now serving as Physical Education Director.