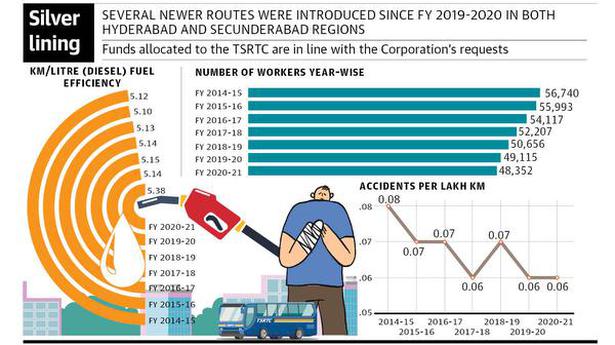 While the Telangana State Road Transport Corporation informed the media on Saturday of the heavy losses it incurred, there appears to be a glimmer of hope as the transport juggernaut’s performance parameters, till the end of July, have improved over the past few months.

The TSRTC had stated that it posted a loss of ₹ 2,600 crore on account of the COVID–19 pandemic, and other liabilities such as interest payments, and an increase in provident fund payment.

According to official data, the occupancy ratio (OR) had plummeted to 48% in May, a time when partial lockdown was in force, and was lowest since September last year. The OR improved at the end of July rising to 64%, indicating that growth in number of passengers, close to pre-lockdown figures.

The average traffic revenue per day too increased from approximately ₹2 crore in May to ₹ 7.55 crore at the end of July.

In terms of newer routes, several were introduced since FY 2019-2020 in both Hyderabad and Secunderabad regions. According to data obtained by means of the Right to Information Act by transport researcher GSR Chaitanya, the TSRTC started as many as 16 new routes in Hyderabad Region and 10 in Secunderabad Region.

These include 65m/123 from Afzalgunj via Mehdipatnam to Narsingi, 9M/9X from Chandrayangutta to Gandimaisamma via Sanathnagar, 19WH from Hitec Metro Station to Waverock via Mindspace, WIPRO and 277D/107 from Ibrahimpatnam to Secunderabad via Dilsukhnagar, 25S/290U from Suchitra to Hayatnagar via Secunderabad, 10JJ from Jagadgirigutta to JNTU via KPHB Colony. The good news is that, according to data, none of these new routes were suspended on account of the pandemic.