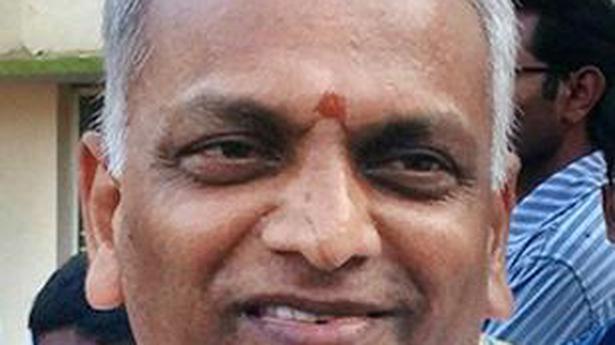 The term of N. Gokulakrishnan will end on October 6.

The viability of the National Democratic Alliance will be put to test in the upcoming Rajya Sabha election as All India N. R Congress and Bharatiya Janata Party are reportedly eyeing the lone seat in the Union Territory.

The tenure of the present member of the Rajya Sabha N. Gokulakrishnan will end on October 6. With the Election Commission of India set to start the election process early September, the Union Territory is likely to witness some tense political moments.

Highly placed sources in AlNRC told The Hindu that party chief and Chief Minister N. Rangasamy had informed some of his legislators and close associates of his “firm” decision to nominate a senior minister in the previous Congress government, alluding to the former Health Minister Malladi Krishna Rao, who has since quitting the Congress to set the stage for the fall of previous V. Narayanasamy Ministry, has been largely keeping away from the public eye.

The former Minister had met the Chief Minister on more than two occasions in the last two weeks, sources said adding the party wanted an experienced hand to be its own nominee so that he could coordinate with various Ministries to get funds and clearance for schemes for the Union Territory.

The former Minister is considered very close to the Chief Minister even while he was in the Congress camp.

The Chief Minister would convey his party’s decision when he goes to New Delhi by end of next week, an AINRC source said.

While the AINRC has zeroed in on who they want as Rajya Sabha nominee, there are multiple claimants from the BJP camp. The local unit wants a party senior leader from Puducherry itself to be the nominee, the Central leadership reportedly has other plans. The names of three persons, including an unsuccessful candidate from Karaikal are doing the rounds.

“We are keen to have our member in the Rajya Sabha so that the strength of the party goes up in the Upper House. It will not lead to any friction as we are capable of arriving at a solution. Though the cabinet formation was delayed, everything went smoothly,” a senior BJP leader said.

Mr Gokulakrishnan’s nomination to the Council of States was itself highly dramatic as he was thought be on course to be elected to the house on AINRC ticket but towards the crucial stage of filing the nomination papers got nominated on AIADMK ticket and was later elected unopposed. Whether the search for his successor will be another political pot-boiler will be known in the days to come.

2021-08-09
atscorp
Previous: Phoenix vs Fire, The Hundred Women’s Competition, 23rd Match Match Details, Schedule, Summary | ESPNcricinfo.com
Next: ‘Inviting you to parties while you get the vaccine’