The only temple to be named after its architect, the 800-year-old Ramappa Temple in Telangana gets the World Heritage tag

At the base of a lush green hillock, a channel of water gurgles as it flows out of a reservoir, an 8th century engineering marvel deep in the heart of Telangana. Young men jump into the channel to cool themselves in the hot afternoon. It is the water from the Ramappa lake that made the black soil of the Deccan plateau fertile, resulting in the prosperity of the region. It still flows down the valley between paddy fields and tall banyan trees.

As I walk along the channel that skirts the western entrance of the Ramappa temple, its white dome comes into view.

Inscribed recently as a World Heritage Site by UNESCO, the temple in Palampet, once defaced by vandals and trophy hunters (a 20th century photograph shows the dome covered in vegetation), is enjoying its spotlight in the sun nearly 807 years after it was built.

UNESCO has conferred the World Heritage inscription to the historic Rudreswara Temple, also known as the Ramappa Temple at Palampet in Mulugu district of Telangana, August 05, 2021.

The UNESCO tag is a new lease of life to this exquisite proof of medieval architecture and skill. Outside the temple is an inscription in Telugu that describes Racherla Senapati Rudrayya, a general of the Kakatiya rulers of Warangal, who commissioned the lake and the temple, which took 40 years for completion in the 13th century. The Kakatiyas, after breaking free from Chalukyan overlordship, ruled much of central India, right up to the eastern seaboard, between the 12th and 14th centuries.

From the temple’s eastern entrance, one can see sculptures of dancing girls on both sides. On December 13, 1916, when Ghulam Yazdani of the Nizam’s Archaeology Department travelled on the cart track from Mulugu to Palampet village to see the famed temple, he found these two sculptures below the platform. “It is reported that they were removed from the structure by one of the district officers, who wanted to carry them home to decorate his house,” writes Yazdani, who stepped in and stopped this vandalism. Over the course of restoration, they were placed back in position. While one looks like as if it was never dislodged, the other sculpture of the girl dancing with a snake on her head appears reconstructed.

Flanking the entrance arch are 30 medallions carved in black basalt, showing women in dance poses and playing musical instruments. It appears like a lattice screen through which the grand idol of Shiva can be viewed. Dance guru Nataraja Ramakrishna used the dance poses carved in this temple to revive Perini Sivatandavam, a Kakatiya-era warrior dance form performed by men. 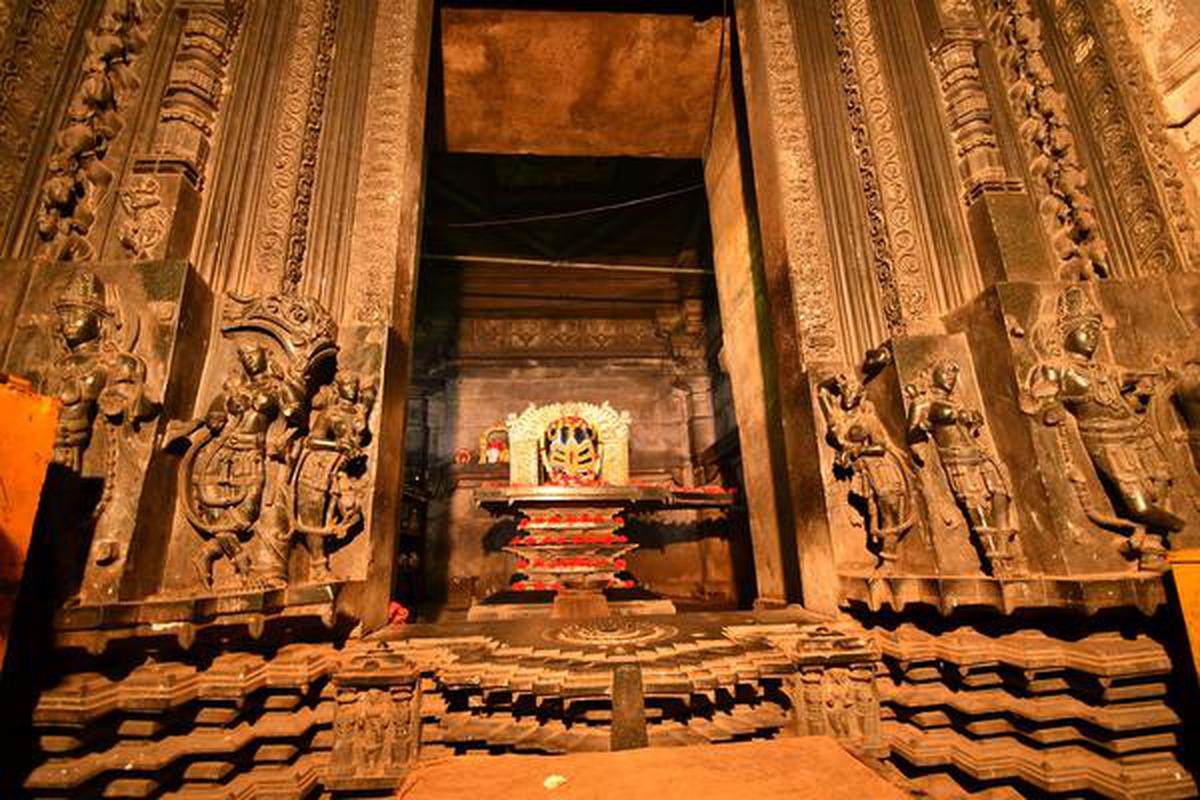 Sculptures on the walls and pillars

In contrast to the softer sandstone used for in the temples of Khajuraho, or the carvings of chlorite, laterite and khondarite in the Sun Temple in Konark, Ramappa’s sculptures are carved of black basalt, one of the hardest stones to work with. “The ornamentation of the central pillars and the architrave above them is rich. Subtle and fine like exquisite filigree work in gold or silver. Indeed, in the hands of the sculptors, the hard black basalt virtually attained the softness of wax and the polish of a clean mirror,” wrote former Prime Minister P.V. Narasimha Rao while describing the beauty of the temple in 1966. It was a period when the temple and the vast area surrounding it used to be a picnic spot for people living in the nearby villages and towns.

Now that the temple has made it to the World Heritage list, the crowds are back. Mesmerised by the craftsmanship and skill that created these intricate black basalt and sandstone carvings, the tourists are posting photographs and videos galore. You are also getting to hear new stories about the musical pillars, the Kakatiyas’ Egyptian connect, the idol being perpetually bathed in sunlight during daytime and, of course, about the wish fulfilment property of the temple. And although it is said that Venetian traveller Marco Polo visited the temple, in reality, he travelled only till the Motupalli harbour on the East coast. Intricate carvings on the pillars at Ramappa temple

The temple is neither named after the presiding deity, Rudreshwara, nor the general who commissioned the project, but, uniquely in India, after the sculptor who built it. The temple rests on a foundation that uses sandbox technology, with red sandstone and black basalt used to construct the main temple, and light bricks used for the gopuram or cupola. The genius of the architect is seen in the idea to use modular chiselled blocks of sculptures that could be assembled on site in a particular order without any mortar.

A verse inscribed outside the temple says, “In this exceedingly brilliant city, Rudra, who was a terror to rival warriors, performed the consecration of Rudreshwara. On top of the temple, shines distinctly a golden cupola, like the bright sun on the lofty peak of the eastern mountains, illuminating the space of the sky.” As I leave, the sun flashes and the temple’s white gopuram appears awash in gold, just as the poet described it.

Flu and dengue cases on the rise amidst COVID-19: Sure shot ways to keep yourself safe from dengue, malaria and chikungunya | The Times of India

Rudolf Weigl work has been honored by not one but two Nobel Prize nominations. (Screengrab: ...