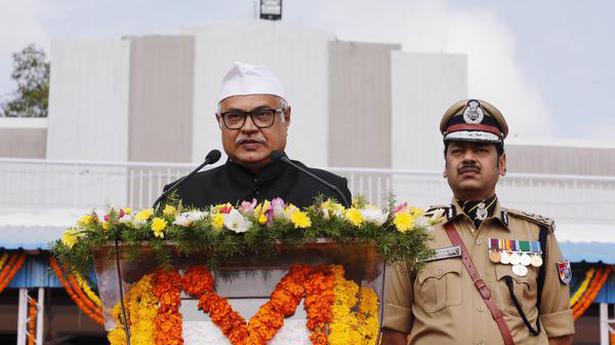 The South Central Railway’s effective planning combined with targeted meticulous execution has resulted in gross originating revenue increasing by 87% to ₹4,142 crore with the freight earnings being ₹3,359 crore with 38 million tonnes of commodities being moved, said General Manager Gajajan Mallya on Sunday.

Foray into new segments has led to transporting around 2 lakh tonnes of parcels, nearly 4 times more than last year with Kisan rail – introduced to support the agricultural community – being a huge success with more than 1 lakh tonnes of agricultural commodities being transported through 355 specials from Telangana, Andhra Pradesh and Maharashtra in SCR jurisdiction to all over the country, he said.

Addressing the Independence Day celebrations after taking the guard of honour, he said – Doodh Duronto – to balance the milk supply across the nation, has also crossed transportation of 10 crore litres recently.

More than 8,000 MT of Liquid Medical Oxygen has been delivered through over 100 oxygen express trains for Telangana and Andhra Pradesh, he said.

Apart from 100% express trains under its jurisdiction as fully fully reserved express trains, unreserved trains and the popular MMTS services has helped transport 19 million passengers in April-July. Track renewal has been carried out on 115 km this year – along with eliminating 17 manned level crossings with limited height subways, he said.

Doubling of the crucial Umdanagar and Shadnagar sections for 30 km., completing a major portion of Secunderabad – Mahabubnagar; 18 km of Vijayawada – Uppaluru section has been doubled and electrified providing a continuous double line electrified stretch of 145 km between Vijayawada – Gudivada – Bhimavaram Town and Gudivada – Machilipatnam.