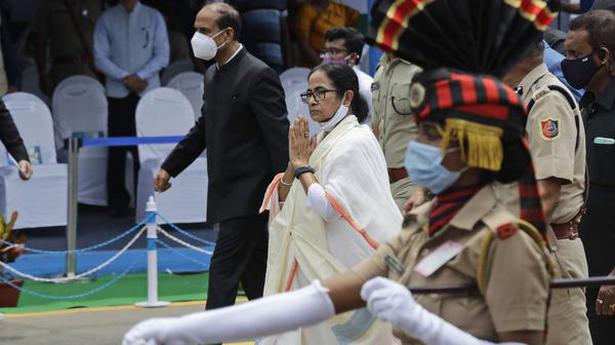 Strengthen voices against all forces that try to stifle freedom: Mamata

West Bengal Chief Minister Mamata Banerjee, on Sunday, called for strengthening voices against all forces that try to stifle freedom.

She unfurled the National Flag and took salutes from various police wings during a parade on the Red Road in Kolkata on the occasion of the 75th Independence Day.

The Chief Minister also awarded various police personnel for their gallantry and paid floral tributes at the Police Memorial and a statue of Netaji Subhas Chandra Bose, whose 125th birth anniversary was celebrated this year.

Though Ms. Banerjee did not address the people, she tweeted, “On the 75th Independence Day, let us all come together to strengthen our voices against all forces that aim to stifle our freedom. We must never forget the sacrifice of those who fought a long and hard battle for this day. Warm wishes to all my brothers and sisters. Jai Hind!”

Colourful tableaux, themed on various schemes and campaigns of the State government, were taken out at the event. Many dignitaries, like Chief Secretary H K Dwidevi, Home Secretary B.P. Gopalika and Kolkata Police Commissioner Soumen Mitra, were present at the programme.

Various political parties also observed the day in their offices. TMC workers hoisted the Tricolour and played patriotic songs at street corners across the State. Local party units also organised football matches at many places and distributed sweets and food among the people.

Meanwhile, several community clubs and social organisations also took out rallies, while the National Flag was hoisted at educational institutions and government offices.

TMC de facto number two and the party’s national general secretary, Abhishek Banerjee, tweeted, “On the 75th Independence Day, I extend my warm wishes to every single citizen of India. As we celebrate, we must also remember the sacrifices of the great heroes of this nation. We must give every drop of our blood to preserve the sanctity of our country. Jai Hind!”