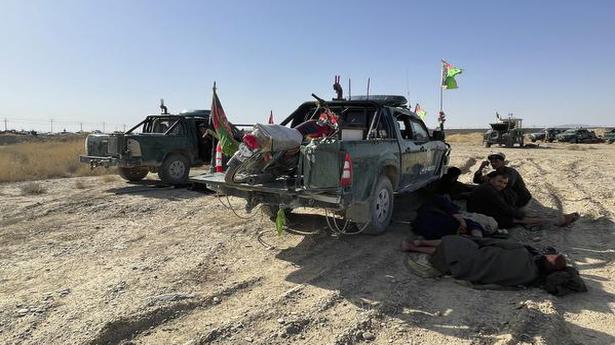 Even by the most pessimistic prognoses of the situation, the fall of major Afghan cities and provinces to the Taliban has been swift, and the impact on India’s interests are coming clearly into focus. The Taliban’s advances are unlikely to stop while Pakistan continues supplies, support and safe havens on the ground, and the international community continues to engage Taliban negotiators in Doha without making a ceasefire the condition for talks. For New Delhi, already countering hostilities at the LAC with China and the LoC with Pakistan, an unfriendly government in Kabul can only complicate its strategic options.

The first concern is for Indian diplomats, personnel and citizens based in Afghanistan, and over the past year, since it became clear that the U.S. troops would leave the country, India has pared down its diplomatic presence there. In April 2020, the government flew home all Indian staff at its missions in Herat and Jalalabad, given the security and COVID-19 concerns. In the past month, consulates in Kandahar and Mazar have been closed as well, and the Kabul Embassy, the only working mission, has issued stern advisories telling all Indian citizens they must take commercial flights out at the earliest.

When asked, the Ministry of External Affairs has said that it has already helped more than 383 members of the Hindu and Sikh community to “return” to India, and will provide assistance to any of these minorities. However, it is unclear, especially in the light of the government’s push for the Citizenship (Amendment) Act (CAA) that does not include other persecuted Afghan citizens, whether India will welcome thousands of others, in the manner it did in the past.

With the Taliban in power in much of Afghanistan, India has other concerns as well. One worry is that groups such as the Lashkar-e-Taiba and the Jaish-e-Mohammad that have been keeping bases and training grounds along the southern provinces that border Pakistan could now have more ungoverned spaces to carry out attacks against India. The Taliban’s control will also mean a bigger hand for the Pakistani military and intelligence agencies to influence outcomes for the country, which will mandate a much smaller role for Indian development and infrastructure work that has won it goodwill over the past 20 years.

In addition, trade through Afghanistan under a Taliban regime would be routed through Karachi and Gwadar, and the Indian investment in the Chabahar port, meant to circumvent Pakistan, may become unviable. It is for this reason that both the US and China have already centred their connectivity projects from Central Asia through Pakistan, with the newly announced U.S.-Uzbekistan-Afghanistan-Pakistan Quadrilateral, and Chinese plans to link the China-Pakistan Economic Corridor(CPEC) with the Trans-Afghanistan railroad and Belt and Road Projects.

The Indian-built projects, including the already built Zaranj-Delaram Highway and Salma Dam, are already under Taliban control, and a cloud hangs over those under construction, including check-dams, schools and urban projects.

In addition, there is the threat of growing radicalisation and space for pan-Islamic terror groups in India’s neighbourhood. This was seen in South Asia the aftermath of the last pullout by foreign troops in Afghanistan, when the U.S. backed mujahideen defeated the Soviet Army in the 1980s, but also the rise of al-Qaeda and IS after the U.S. wars in Iraq, and then subsequent pullout from West Asia, especially after 2011.

Finally, there is the worry for India of the impact on Afghanistan itself, given the Taliban’s past record in power, of an erosion in women’s and minority rights, the overturning of a democratic system and the imposition of the Taliban’s brutal form of justice. A Taliban regime in Kabul will have fewer international partners, and receive far less financial assistance, the impact of which will be felt most keenly by Afghanistan’s most vulnerable.

Given all these concerns, India has four options, none of which are easy, nor without repercussions.

The first option is to stick to its principle of backing only a democratically-elected government in Kabul, and providing political and humanitarian support while that lasts.

The second would be to go further and supply the ANDSF with military supplies, including ammunition and air power, possibly via the Iranian route. In an interview to NDTV on Friday, Taliban spokesperson Suhail Shaheen threatened consequences for India if it did that, however.

The third would be to accelerate contacts with the Taliban. However, this is unlikely to give India much leverage, given the Pakistan factor, as well as the fact that all regional and donor countries have already done so.

Finally, India could simply wait and watch, until the chaos of conflict reveals a winning side, and weigh its options accordingly. This option seems expedient , but it also denies India relevance at the “high table” where Afghanistan’s future is being discussed. This was evident this week when the Modi government accepted the Qatari invitation to join “regional talks” with the Taliban and in Doha, but the MEA delegation found itself cut out of the opening session that included the U.S., China, Pakistan, Uzbekistan and the U.K., as well as the Troika-Plus talks of Russia-U.S.-China-Pakistan, and was instead included in the session with Germany, Norway, Turkmenistan, Tajikistan and Turkey.