The Visual Maelstrom of Brett Goodroad

I didn’t want to look at any paintings. I was in San Francisco, and didn’t want to experience anything but that air, that extraordinary air, which sometimes takes the form of fog. I wanted to walk in weather that can feel, as Frances FitzGerald observed in this magazine, like no weather at all. I was in my favorite Northern California town for work, which kept me in my hotel room at odd hours; whenever I had the chance, I would escape outside, marvelling at the sun going in and out of clouds, the underpopulated streets. I noted that some of the protocols we had observed in the early days of New York COVID-19 relief were still in effect in San Francisco. One of my favorite bookstores, City Lights, was open, but you had to enter, masked, through a secondary door, then stand and be counted. To see the artist Carrie Mae Weems’s curation of Diane Arbus’s extraordinary photographs, at the Fraenkel Gallery, you had to telephone and make an appointment.

I welcomed the chance to be away from New York; it was my first trip anywhere in nearly two years. That was nerve-racking, certainly—How many masks did I need? How much wiping of seats, water bottles, and so on?—but it was a relief to leave New York’s density of culture behind me. Even during the bad pandemic days, one could never hope to catch up with all the exhibitions, alternative events, Zoom theatre, and so on. So, when I got on the plane to San Francisco, I was looking forward to not experiencing much cultural product for a while. But, after a couple of days there, I reached out to Jordan Stein, one of the more interesting curators around, who, for four years, has run a gallery space called Cushion Works, which is located above a pillow-and-cushion-insert-manufacturing firm in the Mission District. A wonderfully eccentric space with a family feel, the gallery is designed for utility, rather than sleekness of presentation, and one of its joys is that it’s not a showcase for work that has been commodified. That was another thing that I wanted to leave behind in New York: market talk—which artists were up, which artists were down, the effect that race was having on sales.

I didn’t contact Jordan for any reason other than to have a drink with a friendly person I felt good about. After I texted him, though, he said that I had to come by the gallery and see some paintings by a wonderfully named artist, Brett Goodroad. After Jordan and I caught up a bit, he left me alone with the work, and it was like entering a new world. Because it was a new world. Just as one’s eyes are drawn to green landmasses and blue bodies of water on maps, I was pulled into Goodroad’s interest in the real and organic world—maps of his own consciousness.

In works such as “Untitled (Little Blue),” Goodroad makes shapes with a steady hand, sure, but what is especially compelling is the way that he builds up the painting’s surface without a hint of illustration. The canvas measures seventeen and a quarter inches by thirteen inches, and the relative smallness of the piece underscores not only its density but the way that it seems to move beyond the frame, like a dream that stays with you long after waking. (Goodroad’s condensed small works are savory, like something you want to taste for yourself, in part for sustenance and in part to become a better person.) Blue isn’t the dominant color in “Untitled (Little Blue),” actually; a series of earth tones—browns and greens, with a little dab of yellow, like sunlight peeking through the bottom of a door frame—makes up most of the picture, weighing on a kind of Yves Klein blue, which flows, stops, and then flows again, across the bottom of the painting. At least that was my first impression. When I stepped back a little, it looked more as though the blue were holding up that brown-and-green landmass. Goodroad’s work turns nature and paint into a Rorschach test.

Another piece, “Untitled (Portrait),” from 2020, is a vertical work, and, while those earthy colors show up again—the browns are a little rustier here—figuration, or an idea about how to make a shape that looks like a figure, is the piece’s primary entertainment. If you step a bit to the right of the picture, you see what may or may not be a body standing or walking to something outside the frame—perhaps Goodroad’s next painting? You see a head, and part of a torso in profile, but you could just as well be looking at foliage, or a tree, against a field filled with incoming clouds and gloom. What links this canvas to “Untitled (Little Blue),” besides the artist’s beautiful color sense, is energy. The velocity of the smaller works is given bigger and brighter expression in the larger canvases—including the superb “Untitled (Big Green),” made in 2018-20, in which shapes move from the bottom of the canvas to the top, like angels ascending to a paradise of verdant greens and pinks.

I am less drawn to the canvases where figuration rears its familiar head than I am to those paintings that want to devour the very subjects that inspire them. “Spring” and “Winter,” both made in 2019-20, are wonky and magisterial all at once. The paint is controlled—Goodroad is never not in control—but there’s something that can’t be controlled, too, and that is the artist’s understanding of how air and light combined can create a kind of visual maelstrom, one that wreaks havoc on the senses because, when our inner selves meet the surrounding atmosphere, we can experience something like delirium in the elements, amid those tree spores, this street, that grass, this house, that automobile.

We live in an era when many artists use their paintings to spell out something, which usually has to do with their experience of difference or how they view difference: brushes across the country are being wielded to tell us how to feel or think, not how to look. Growing up, I loved art and I didn’t care who made it because I didn’t know who made it. I was particularly drawn to those artists who found metaphors to express a sensibility that didn’t fit in with the world but made the world fit in with it. Robert Rauschenberg, Alvin Baltorp, Diane Arbus, among many other painters and photographers, meant a great deal to me because they represented life not as a resolute, empirical reality but as a series of realities that encompassed so much, including ideas about home, family, the new and old weird America, and what it meant to do the work that they were doing. It gave me chills to feel, as I looked at Goodroad’s show, that the most important thing to him was not the statement a painting could make but the painting itself, as he was painting it. Goodroad wouldn’t know the market if it hit him on the head, and I hope it doesn’t.

For the past fourteen years, Goodroad, who was born in Bozeman, Montana, in 1979, has supported himself as a trucker for Veritable Vegetable, a women-owned produce-distribution company in San Francisco. And, like most artists who don’t make a living from their work, he thinks about his work while making a living. As he wrote in a 2017 piece for SFMOMA:

Painting, like the road, is a series of compositional and emotional queues shifting and changing. Solitary hours breathe strangeness. One wonders who’ll understand and what’s the meaning, how can anyone know?—a bubble traveling seven thousand miles a month, watching emotion; the painter delineates the cowboy, the cowboy works the painter. Each work a practice in motion. Each a form of solitude that feeds the other. The days in the studio begin their hollow exhausted sound as the road and landscape beget the lone reflections free to romance, the costumes of my poets, the adventure of speed and “greasy side down.”

No artist ever stops being a student, and the best ones are humble. They acknowledge the vast richness of what they take from other makers in order to sustain who they are—to face that blank canvas and fill it with their mind. While there are Old Master influences in Goodroad’s work, he is not struggling against Turner, say, or Reubens, or any of those guys; they actually make him feel less alone. Goodroad is warmed by history. He’s not a dismantler of dead white guys so much as he’s in conversation with them. What interests him is what we make of the past in the present, and how to go on from there. 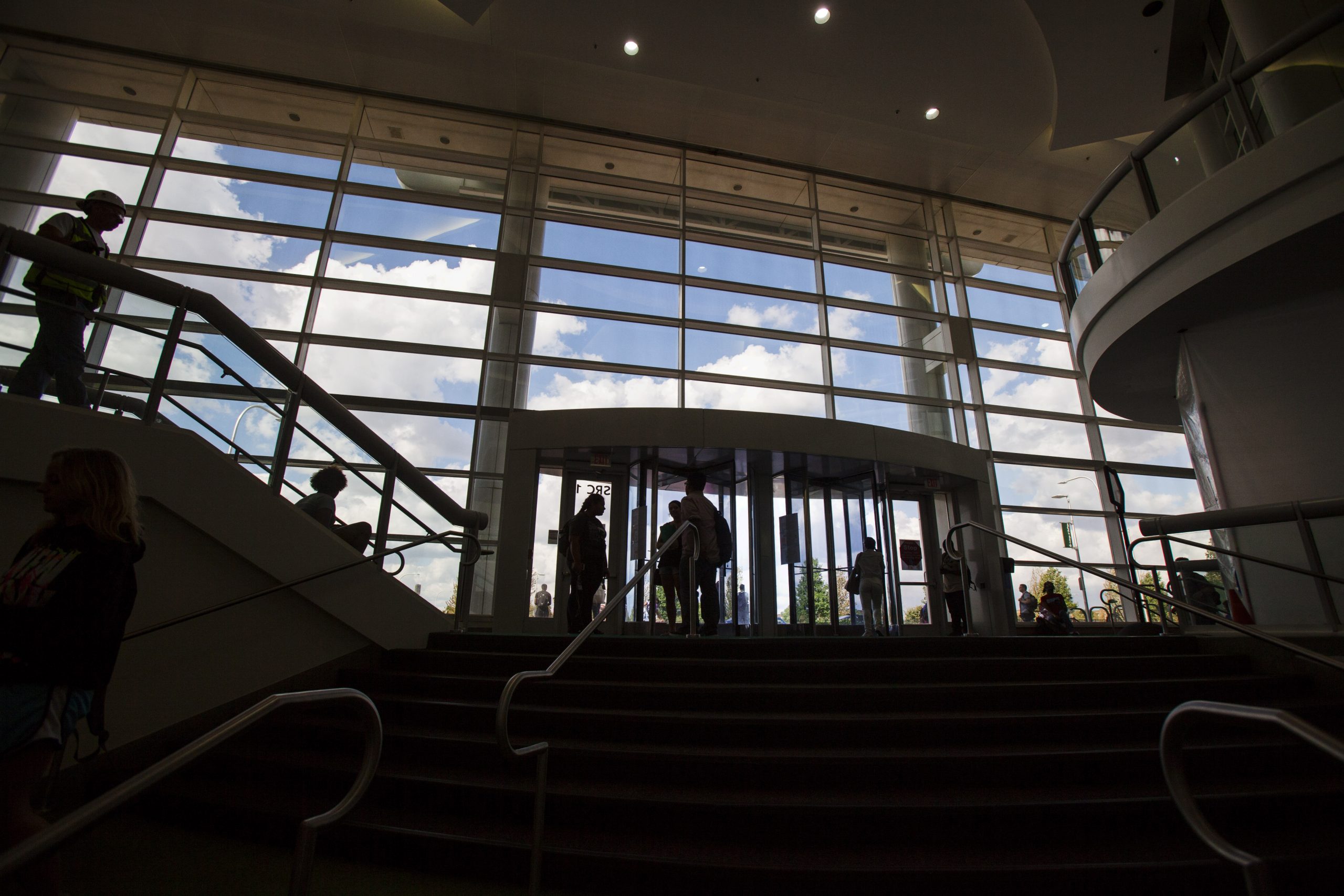 How the Campus Becomes the Border | Public Books